Bri Hatch, Sr. Director of IT Operations, has worn purple toenail polish every day for the past 25+ years, which he often proudly displays without the burden of shoes. He also sports long, glorious locks and a majestic beard.

Correction: Had long, glorious locks. Last week, he shaved it all off in support of women and diversity in tech.

It started at the end of August when Bri thought, why not switch up the purple nail polish? Without thinking further into it, he decided to let his colleagues at ExtraHop vote on a new color, saying "I thought it'd be fun to let everyone vote for my little piggies' pigment. And, while I'm at it, let's raise some money for a cause about which I feel passionately—increasing opportunities for women and people of color in tech at every level, from education to leadership." Bri emailed out the challenge for all his fellow ExtraHoppers, allowing them to cast a ballot via donations to non-profit organizations that support tech diversity.

Donations came in faster than expected. Bri responded by upping the stakes, and things got out of hand: ExtraHop employee donations (matched by two anonymous co-founders) totaled $31,415.92 (that number has special significance wink wink), and Bri agreed to a full makeover based on votes from his colleagues—complete with fake nails, green and "ExtraHop teal" hair and temporary tattoos (featuring visual elements from our collective work-baby Reveal(x) 360). He's also sporting rainbow toenails, replacing his cherished purple. When ExtraHoppers reached the final benchmark, Bri took it a step further and agreed to shave off his newly dyed hair. 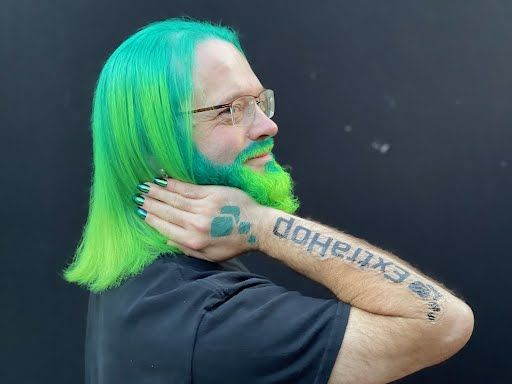 Bri honestly just wants to hire more people that don't look like him. "The worst thing we can do as a department and as a company is to have a bunch of people who all look and sound the same," he says. "It leads to worse decisions. Having diversity of thought, having diversity of backgrounds leads to better results for everything."

There is research that backs up Bri's point: A study conducted at the University of Michigan found that diversity can boost team problem solving performance, and a 2020 report by McKinsey & Company finds that companies with more gender, racial, and ethnic diversity outperform their industry peers.

Unfortunately, the tech industry is still very male dominated. Women make up 49 percent of the workforce in the United States, but only 26% of the tech workforce, according to a 2021 CompTIA Research Report. The same report also finds that nationally, Black, Hispanic, and Latino populations are underrepresented in the tech workforce.

What's worse, signs of industry-wide progress have been negligible: A 2016 report published by the National Center for Women & Information technology found that women represented 25% of the tech workforce, indicating little change in five years.

Bri isn't alone in trying to change the industry status quo. "We have buy-in from the exec level. This isn't a skunksworks project only in select teams," he remarked. Bri has been at ExtraHop for a number of years, and he has experienced how ExtraHop has valued differences and embraced an inclusive mindset from the beginning—a fact that he attributes largely to the workplace culture fostered by company leadership. Education and advocacy organizations like the ones ExtraHop employees donated to help feed the pipeline of women in the technology industry, helping assure greater diversity in the future, but beyond that, Bri has advice for the cohort of mostly white, male technology leaders:

Organizations Committed to Diversity in Tech

For those wondering, Bri is adjusting well to his new look, and while he's got plenty of ExtraHop team spirit, he seems to be looking forward to reverting his toenails back to an old standard. "Purple is my favorite color. I thought that it would win for either my toes or my hair, but clearly ExtraHoppers wanted to showcase diversity (rainbow toes) and their ExtraHop spirit (hair). I should have seen it coming."

If you're interested in gaining a colorful colleague like Bri as well as a long list of other fun, creative ExtraHoppers, check out our careers page. We're hiring!

Learn how ExtraHop employees are using their volunteer time off in service to the community.

How the security practices of third-party vendors leave the door open for hackers to steal enterprise data.