The Tricks of Our Trade: How Reveal(x) Uses Machine Learning

Modern enterprises are moving at a breakneck pace and security teams struggle to keep up with all the new vulnerabilities, TTPs, security logs, and event data being generated every day. While Reveal(x) provides industry-leading network visibility (north-south and east-west) into customers' hybrid enterprise environments, we at ExtraHop believe it is also paramount to perform automated, high-quality detections as part of a complete NDR solution. At the end of the day, security data that are automatically analyzed and used to generate actionable insights create vastly more value than data that are unanalyzed and simply archived.

In a previous post, I explained the basic architecture of our cloud-scale machine learning (ML) as well as the key benefits this type of architecture provides when compared to locally-hosted ML. This blog post will focus on ExtraHop Reveal(x) specifically, so you can see how our industry-leading network detection and response (NDR) product empowers security teams through advanced ML technologies.

Reveal(x) leverages cloud-scale ML architecture to deliver best-in-class scalability and threat detection. ExtraHop has invested heavily in machine learning and combined our years of experience in threat research, network analytics, and data science to build best-in-class ML technology into the core of Reveal(x).

More specifically, Reveal(x) uses ML to not only detect attacks but also help customers investigate and respond to attacks faster by automating information gathering and putting that information into context.

In order to achieve this, Reveal(x)'s ML is built using a multi-subsystem design, very similar to modern autonomous driving solutions, where a collection of sophisticated and patented ML subsystems—designed to extract insights, detect threats, and gather context—work in unison. Here is an example of Udacity's autonomous driving system: 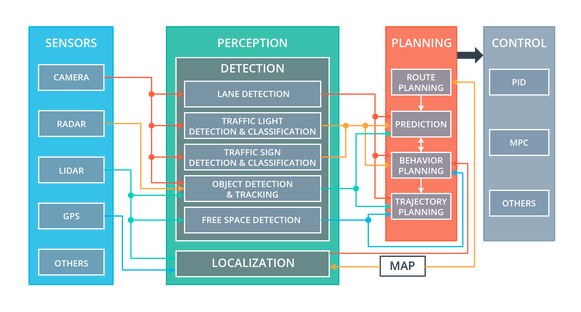 In Reveal(x), the ML-powered analysis and detection are delivered by 3 subsystems: Perception, Detection, and Investigation. Each subsystem contains multiple components responsible for different distinct functions. ML components in the same subsystem and across different subsystems collaborate and exchange data and findings: 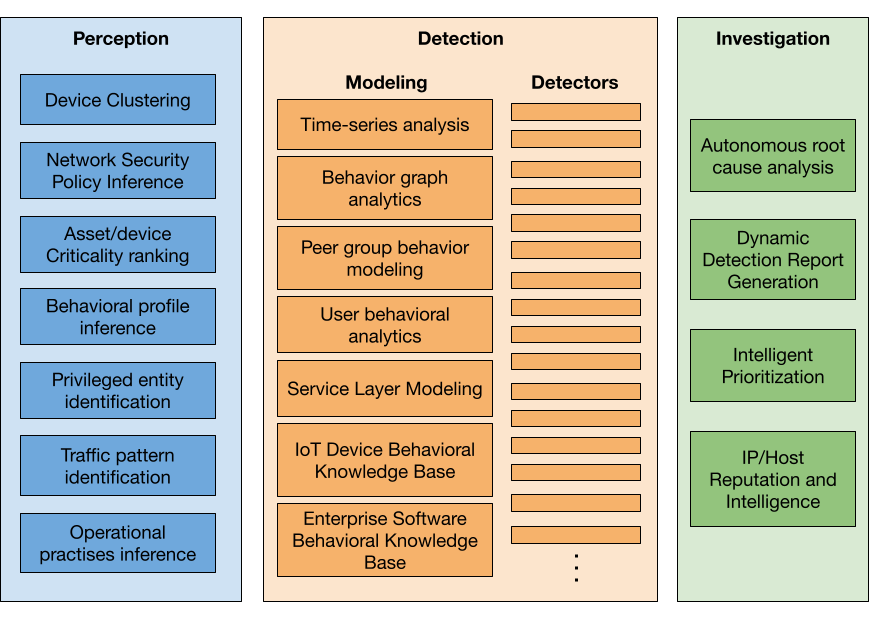 The first subsystem is Perception, which contains a suite of ML components focused on understanding each customer's unique environment. With over a decade of experience in analyzing network data, we at ExtraHop know that each customer's environment is different and each customer has its own unique IT and security policies and practices. In order to produce the best analytical results specific to each customer, we built multiple components to automatically infer customer-specific contextual information, such as peer groups, security policies and device and user roles, based on observed unique behaviors of every entity on the network.

These contextual pieces of information are later ingested by other components to improve accuracy and reduce noise. Some of the components in the Perception subsystem are: 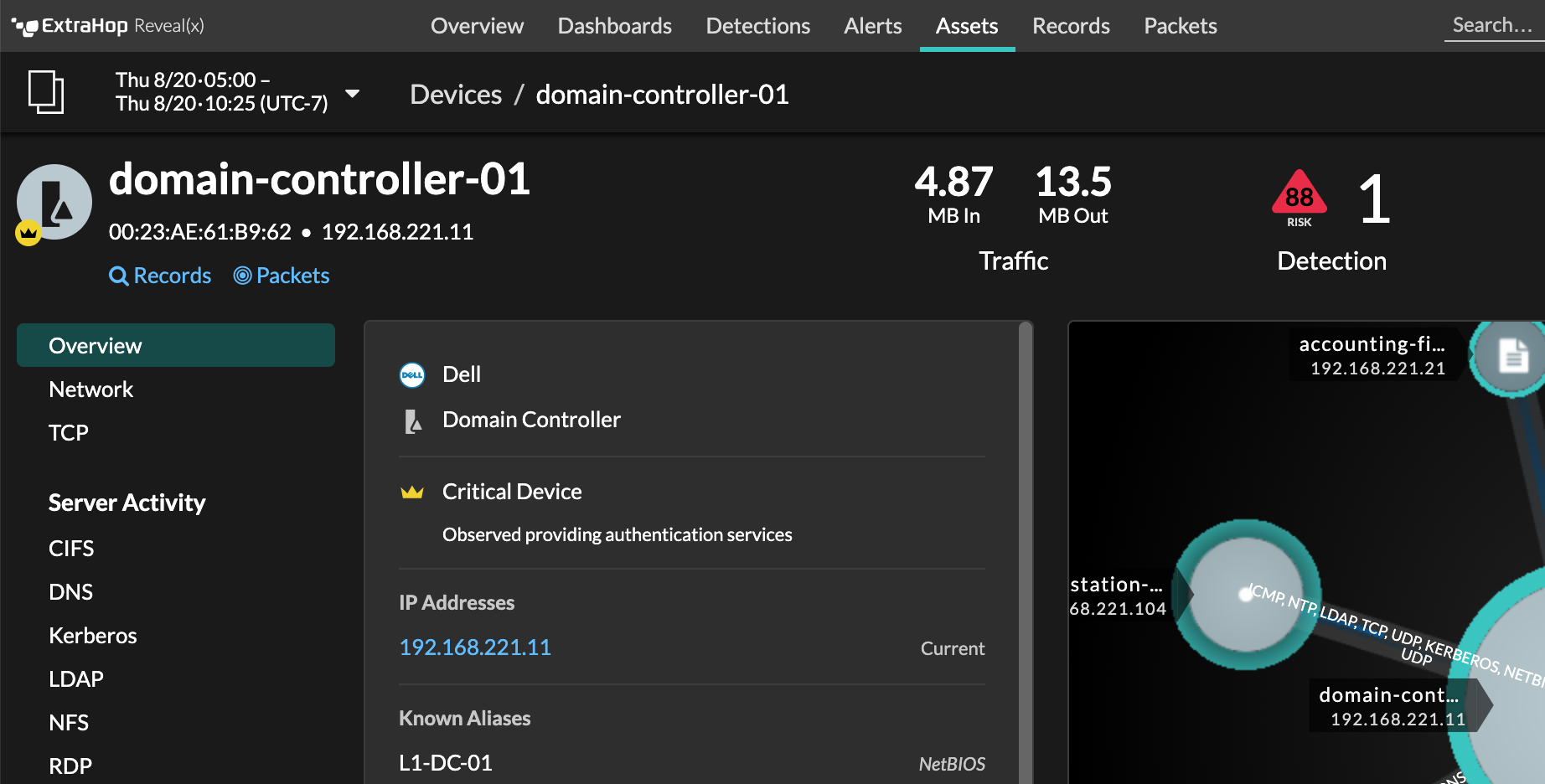 Reveal(x) "perceives" various aspects about devices discovered on the network, including their role, peer group, criticality, users logged in, and more.

The second and largest subsystem is Detection and it consists of a collection of components that build self-adapting predictive models for every single entity (device and user) on the network. We then feed the modeling and other metadata (such as knowledge inferred from the Perception ML components) into a large set of specialized detectors. The models are continuously updated, making sure they reflect the up-to-date behavior patterns.

Due to the diversity of the forms and techniques used by modern cyber threats, no one model is general enough to identify all attacks. Instead, Reveal(x) relies on an ensemble of predictive model classes, each covering a specific aspect of an entity's behavior. In some cases, Reveal(x) can create over a hundred models for a single device or user, depending on its activity, criticality and attributes. To detect potential threats, we also developed hundreds of purpose-built detectors (see more in our whitepapers around detection) that analyze observed behavior in real time.

Every ML-based detector is custom-built for detecting a specific suspicious behavior or attack technique, identified by our threat research team, and uniquely leverages their security expertise and sophisticated predictive models. In addition to that, the detectors are constantly being refined based on learning from the field team and customers. Here are a few ML components in this subsystem:

Based in large part on the perception of a device described earlier, Reveal(x) detects suspicious deviations from normal behavior.

The third subsystem is Investigation, which is in charge of providing automated analysis for potential threats detected and assisting in the triage, investigation and remediation processes. We spent significant effort building and refining components in this subsystem because detecting potential threats is only half of the battle. Being able to easily triage, investigate, and remediate threats is equally important to our customers.

Reveal(x) automatically curates relevant information so that an analyst can quickly determine the scope and severity of an event.

If you're curious about how these subsystems work in practice, give our interactive demo a try or reach out for a conversation with an engineer—we're happy to answer questions or walk through specific use cases.

Show and Tell: What a Live Attack Simulation Looks Like in Reveal(x)

Our online demo now features a live attack simulation where you can observe a hacker doing her job: exploiting a Drupal vulnerability, installing custom executables through PsExec, and more.

Read the first in a series of blogs detailing how ExtraHop's cloud-scale machine learning works, and why it makes our network detection and response products the industry leaders in hybrid cloud security.

How Does Reveal(x) Detect Threats?