What are Kerberos Golden Ticket Attacks and How to Detect Them

When a user wants to access a network service—to print a file or access a database, for example—they must first prove their identity and privileges to the service. The Kerberos authentication protocol (common in Windows Active Directory environments) acts like a checkpoint and issues tickets that vouch for the identity of the user. The ticket is then evaluated by the service.

Without Kerberos, users would need to constantly submit plaintext passwords to interact with network services. Kerberos provides many benefits that help make authentication secure and convenient.

But skilled attackers can exploit weaknesses in Kerberos to forge a golden ticket. Despite the entertaining reference to Charlie and the Chocolate Factory, a golden ticket attack is extremely dangerous. The attacker has not only subverted normal authentication workflows, but also gained unlimited access to any account or resource on an Active Directory domain.

Kerberos acts as a trusted third party, working with a domain controller (DC) to authenticate clients trying to access services. The Kerberos authentication workflow revolves around tickets, which act as a cryptographic proof of identity that can be exchanged between clients, services, and the DC.

Let's review the basic components in a Microsoft Kerberos Active Directory authentication workflow that are relevant to a golden ticket attack.

Acquiring Kerberos tickets requires several complex interactions. Here's a general Kerberos workflow that highlights the basic components relevant to a golden ticket attack. The name of the Kerberos requests and responses that are seen on the network are also highlighted (such as AS_REQ, AS_RSP, etc.) 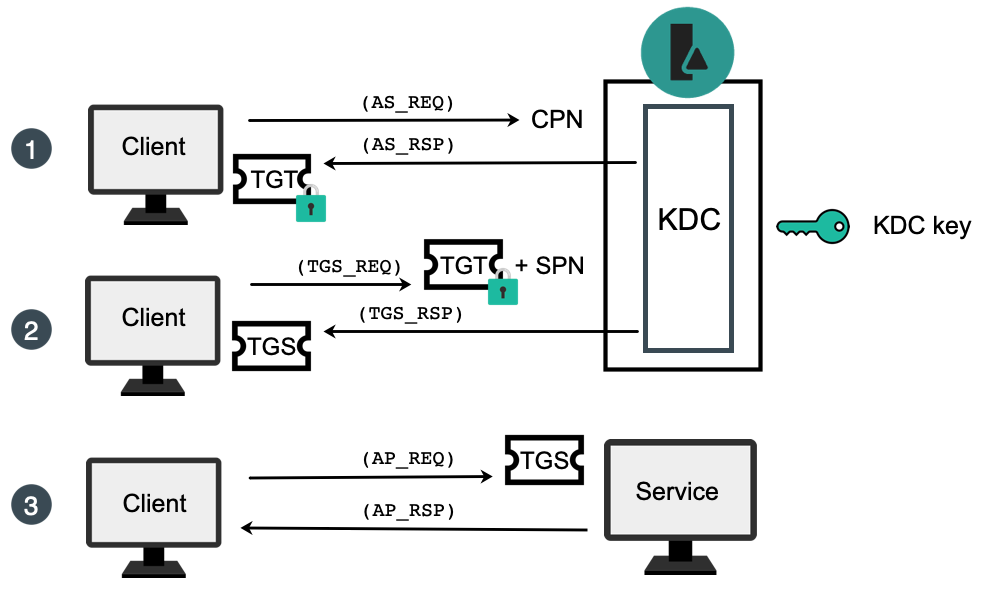 For more detailed information about the entire Kerberos workflow, visit this Kerberos tutorial site or the RFC for the Kerberos protocol.

Gartner Report: How to Respond to the 2022 Cyberthreat Landscape

What Is a Golden Ticket?

A golden ticket is a forged TGT created with a stolen KDC key. A golden ticket enables the attacker to create a fake domain administrator identity to gain access to any service on a domain.

The KDC automatically trusts a TGT that is encrypted with a KDC key. But stealing the KDC key is not an easy feat. To do this, an attacker must establish themselves on the network, escalate their privileges, and compromise the DC. All of these steps require expertise and time. But this attack can be facilitated with the help of tools, such as Mimikatz or Empire, designed to exploit Kerberos.

Here's the general workflow for a golden ticket attack. 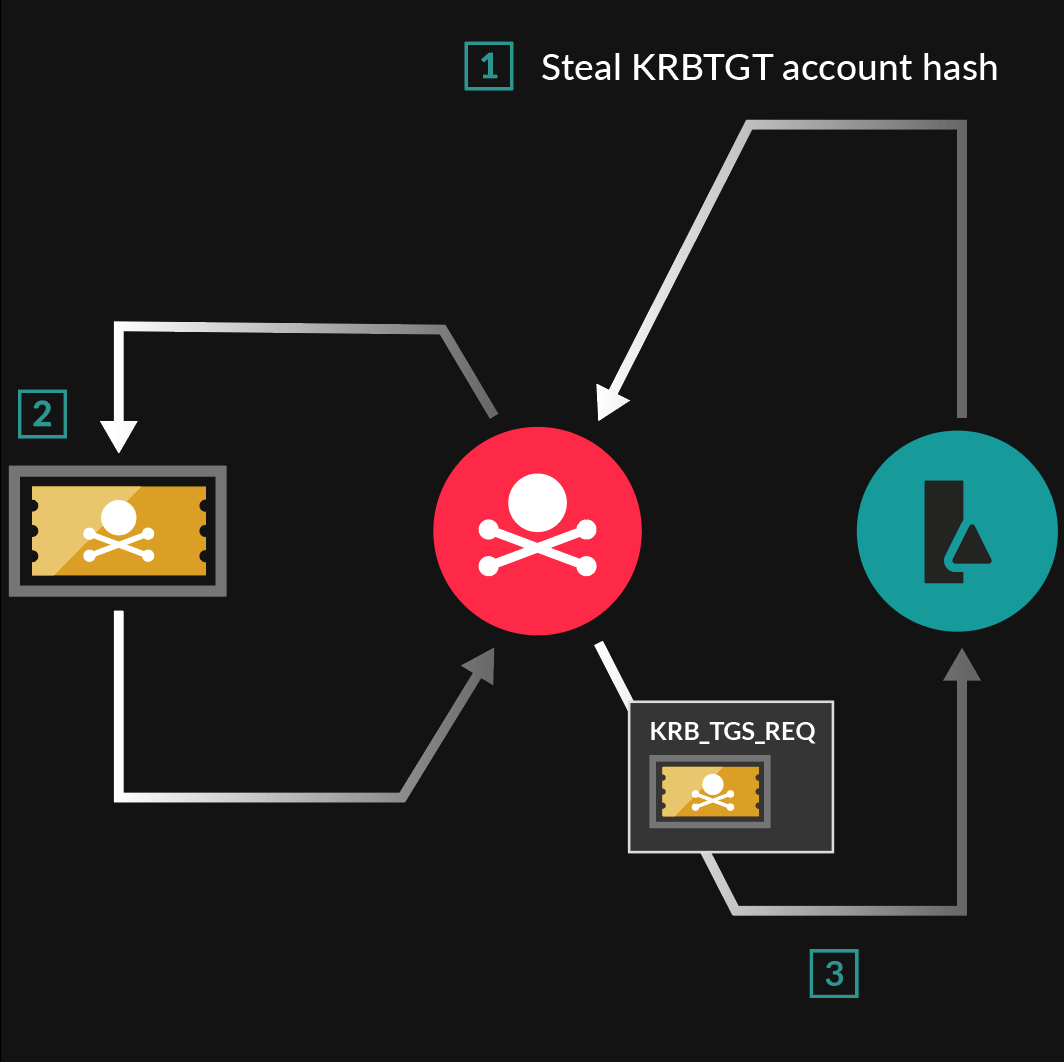 With Mimikatz, the attacker can bypass the step of compromising the DC to steal the KRBTGT account hash (KDC key) with a technique called DCSync (1). With the stolen KDC key, Mimikatz helps the attacker create a golden ticket with a fake username and PAC, specifying domain administrator privileges for that username (2). The attacker bypasses the initial step of requesting the TGT from the KDC and directly requests a TGS ticket for a service, such as an administrative share or an important database (3). The KDC trusts the golden ticket and creates a TGS ticket with the fake PAC.

How to Detect Golden Ticket Attacks

Monitor for unusual activity associated with Active Directory and Keberos. You can audit Kerberos AS and TGS events for discrepancies. Windows logon and logoff events that contain empty fields (Event ID 4624, 4672, and 4634) can be indicators of a golden ticket or pass-the-ticket activity associated with golden tickets. Other indicators of a golden ticket attack can include TGS ticket requests without previous TGT requests or TGT tickets with arbitrary lifetime values.

Reveal(x) automatically detects Kerberos requests for TGS tickets (TGS_REQ) sent over the network that include indicators of a forged TGT. (You can enhance Kerberos detection capabilities by enabling DC-assisted decryption in Reveal(x).) 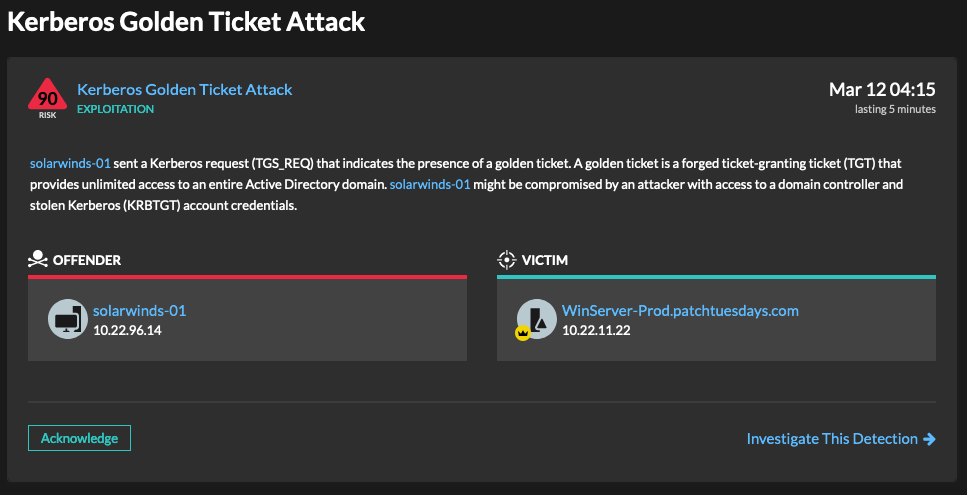 How to Prevent Golden Ticket Attacks

Why NDR? Read the KuppingerCole analysis.

TCP reset attacks can take down internet connection, but TCP RST is also used by some security solutions to automate containment. Learn why it's (honestly) a weird approach to take.

What is ICMP Tunneling and How to Protect Against It

Learn from ExtraHop how ICMP tunneling attacks work and what you can do to protect against them. Examples included.

Read an example of how one government organization safeguarded its data by using ExtraHop Reveal(x) to detect an attempted SQL injection attack.