In IT, there's an adage that packets never lie. Packet captures are the gold standard for determining what actually happened. This is true, as the observed communication over the network is empirical data. However, as a means to provide visibility to a modern IT organization, continuous packet capture is horribly outdated and inadequate.

Until now, network teams have only had network performance monitoring (NPM) tools that wrote packets to disk, also known as data at rest. When you are trying to respond to performance or security issues proactively, it's better to analyze the information traversing the network while it's in motion, otherwise known as data in flight.

That's the main difference between legacy NPM tools, including those from Riverbed, Netscout, and Corvil, and the ExtraHop platform—those products rely on write-to-disk architectures that put the bottleneck on performance on the ability to write to and read from disks. In contrast, ExtraHop uses a streaming architecture that analyzes all the packets before writing anything to disk. This approach puts the bottleneck on the bus throughput, RAM, and CPU. See the diagram below. 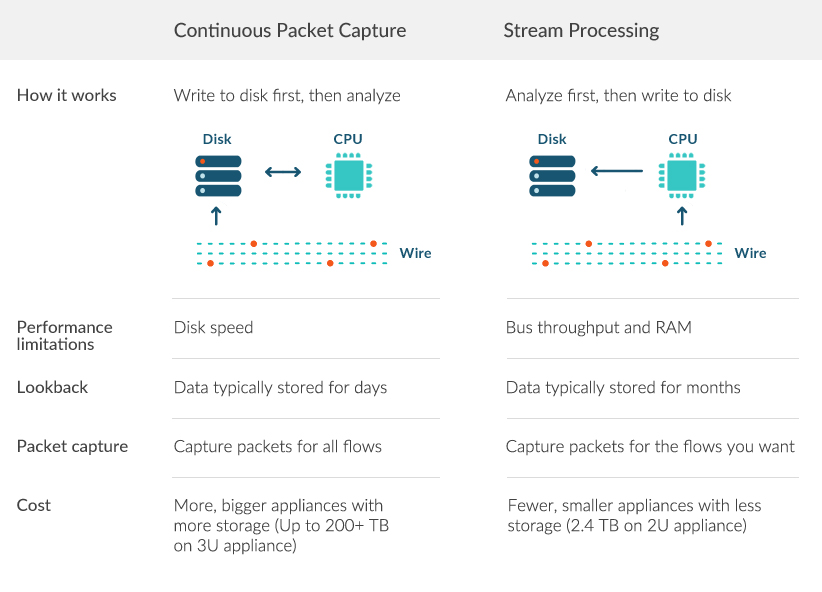 Write-to-disk architectures have their roots in technology from 1987. They don't scale, and can't handle the volume of data in a modern network.

To understand the limits of write-to-disk architectures, it's helpful to remember that packet capture technology was implemented in 1987, when Van Jacobsen created tcpdump. Today's network speeds are well over 10,000 times as fast, which is why network performance monitoring tools keep adding disk spindles, faster disk speeds, better compression, and deeper buffers. These are band-aids on the problem. Looking at the amount of storage that is in their product portfolios, you could be excused for thinking that these NPM vendors are in the storage business!

Meanwhile, their users are struggling to keep up with the deluge of data. Enterprises we have spoken with complain that their packet capture solutions cannot provide enough lookback to cover a weekend!

When Jesse and I designed the architecture of the ExtraHop platform, we wanted to build a product that could mine the wire for real-time insights. We knew that there was a wealth of information that was on the wire, but that the volume of this data made the traditional continuous packet capture approach infeasible.

With our previous experience building a platform that brokered streams of packets at massive scale, we understood that advances in multicore processing and storage would be able to keep up with expected increases in network traffic, especially as high-speed stream parsing is a highly parallelizable task. To learn more, read Jesse's blog post, Under the Hood: How ExtraHop Takes Advantage of Multicore Processing.

Instead of the traditional write-to-disk architecture, we opted for a streaming approach for several reasons:

Bring NPM into the Modern Era

With the ExtraHop platform, you can bring your network monitoring into the modern era. Many of our customers are on network teams. Previous to bringing on ExtraHop, these people were called in as a last-resort in their organizations because they knew how to decipher packet captures. They would spend hours sifting through these captures, looking for the needle in the haystack. Now, these highly skilled engineers equip application teams and others with the visibility that they need through ExtraHop. Instead of being relegated to the role of "the sniffer guy," these people have elevated themselves and their teams to become key players in IT, security, and even business operations.

Ready to make the leap from legacy NPM to IT Operations Analytics for network teams? Check out our online demo and then schedule a meeting.