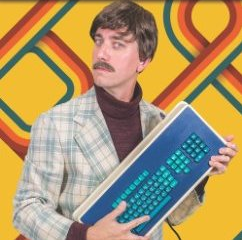 Brian Madden's LinkedIn photo. Not only is he fiercely technical, but also very funny. You'll be missed in VDI-land, Brian

The world of VDI will never be the same.

Beloved VDI (and pinball) wizard Brian Madden is departing TechTarget, leaving behind his namesake website. For the past decade-plus, has been the canonical resource for IT folks seeking enlightenment about desktop virtualization and a host of other IT topics.

Brian's departure is the end of an era. Last week, he did the 120th, and likely second-to-last, episode of his podcast, and we were thrilled to have ExtraHop engineer and longtime Citrix Technology Professional John Smith as a featured guest on the episode. Brian and John have known each other for years, so what started out as a "sponsored podcast where we talk about ExtraHop for an hour" turned into a very crunchy conversation between four guys (Jack Madden and Gabe Knuth are also featured) who know a combined metric kiloton about VDI. Great stuff!

Here's the recording, available to you for Free, (Free, FREE), so dive in if you want to hear two experts go deep on some of the toughest challenges in the VDI space, including:

A quick pitch: ExtraHop is at the last Briforum ever right now, so if you liked this podcast, stop by and meet us at booth #112to get more expert insight on how to get better visibility and security in your environment with ExtraHop.

Up next: Use The Five L's for Citrix Troubleshooting