The Return of the Generalist in IT 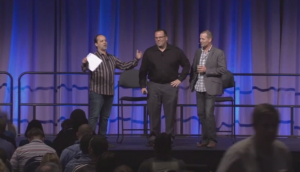 I recently spoke at Citrix Synergy about the return of the generalist. It was a Geek Speak Live! session with several hundred Citrix engineers in attendance. It was an honor for me and something I've long looked forward to as a Citrix Technology Professional and author of the Edgesight Under the Hood blog. (You can watch the talk in the video embedded at the end of this post. I show up just after 4:30 minutes.)


Where Did the Generalist Go?

One of the things that we've lamented in IT is the "death of the generalist" in which skills requirements have narrowed. To use a four-year college degree as an analogy, it seems as though a lot of new IT professionals jump right into their junior year, skipping their breadth requirements, and don't really diversify and learn other disciplines as a result.


In my first job in IT, I was the UNIX guy, the Cisco administrator, and the Microsoft SQL DBA. It was really interesting, but there was a lot of chaos in the late 1990s and early 2000s. Since then, in order to bring order to what was somewhat organized chaos, we've grouped people so that you have:

Skill sets in IT are generally divided between networking, systems, and development.


But I think the generalist is returning, and here's why:


Signs the Generalist Is Returning

In the last few years, we've seen some systems folks starting to branch out, learning PowerShell and Python, because some of the ways that we manage and monitor systems is by using APIs. Citrix engineers understand the need for this generalization because they are kind of like Dr. Who—they regenerate every time Citrix makes a new acquisition. And a lot of our skill sets have followed the growth of the Citrix portfolio into mobile device management, application delivery controllers, and so forth. With some of the things that Brandon Shell and Jason Conger have done, PowerShell has become very popular. And with Edgesight, you had to learn how to make ad hoc queries. So we're using PowerShell and SQL, and if you've done anything with NetScaler, then you probably have to use regex.


This generalization is not unique to Citrix environments. The other day I was supporting an ExtraHop customer setting up wire data analytics in a virtualized environment. I noticed that we had the network architect and the cloud architect working together, but I saw that these two positions are on a collision course as software-defined networking (SDN) forces them to learn the skills of the other.


What Is Driving Generalization?

Matt Cauthorn, Director of Systems Engineering at ExtraHop, wrote something recently that struck a chord with me: "The coming changes in virtual computing are going to force people out of their comfort zones and it's going to be special."


The way I see it, there are three major trends driving generalization in IT:


In conclusion, this isn't the first time that IT professionals have had to learn new skill sets. IT professionals that have the generalist skills needed to handle the convergence of virtualization, networking, and systems administration will be more marketable to IT organizations.


If you have thoughts, we'd love to hear them! Please leave a comment below or engage me directly on Twitter at @jmsazboy.

Watch the recorded session below (starting just after 4:30), or view here if the player is misbehaving.