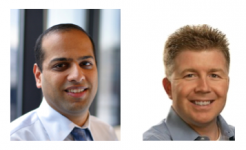 Today, we are delighted to announce two great additions to the ExtraHop team: Sujal Patel and Eric Scollard. Both join ExtraHop from Isilon Systems and bring impressive experience in turning a tech startup into a tech powerhouse.

Sujal joins ExtraHop as a Board Member while remaining CEO at Isilon, a position he has held since 2007 after having founded it in 2001. For those not familiar, the Isilon story is one of the tech industry's great successes of the last decade. Sujal helped grow Isilon from an innovative startup to one of the leading enterprise storage technology providers in the world, ultimately being acquired by EMC for $2.25 billion less than a decade after the company was founded. With many parallels between ExtraHop and Isilon, including a common target market, business model, and commitment to technical innovation, Sujal's operational experience will be a valuable asset as ExtraHop scales and transitions from an early-stage company into a larger business.

Eric joins us as Senior Vice President of Worldwide Sales after having built a world-class sales organization at Isilon, where he led his team from pre-revenue to nearly $100 million in annual sales. At ExtraHop, Eric will focus on sales execution and our go-to-market efforts. We're excited to bring Eric on board as we continue to grow our organization and expand our market share.


Delivering on Our Vision: Applications and IT Environments Have Fundamentally Changed

With both new additions, the ExtraHop team will continue to deliver on our vision for the future of the application performance management (APM) industry. This vision starts with an understanding that applications and the IT environments in which they operate have fundamentally changed. Applications are developed and deployed in vastly different ways, and IT environments have become increasingly dynamic and flooded with data. Meanwhile, most legacy APM products still use decades-old technologies and are increasingly unable to scale or adapt. To fill the growing gaps in their solutions, APM vendors bolt on acquired technologies to aging technical architectures. As a result, IT organizations find that their legacy monitoring tools, which rely on host-based instrumentation, cannot provide adequate visibility into the performance of increasingly dynamic, distributed, and heterogeneous applications. The ExtraHop system solves this critical problem by focusing on the single constant in the modern data center and increasingly the only arbiter of truth: the network and the communications between systems that pass over the network. This innovative network-based approach, engineered specifically to solve a complex problem, is helping to transform ExtraHop into a true tech powerhouse in the industry.


This evolving opportunity in the APM market is very similar to the opportunity that emerged in the enterprise storage market when Isilon started. Due to increasing numbers of users and user-generated content, IT organizations very quickly found that their conventional storage structures could neither perform quickly when dealing with large amounts of unstructured data nor scale economically to accommodate the increase in that data. Isilon saw tremendous success because its products were built from the ground up to handle this type of workload; traditional enterprise storage vendors added incremental improvements, but nothing revolutionary.

ExtraHop Networks is on a mission to revolutionize the APM market in the same way. We've seen great progress in the last year, with increasing traction in the EMEA market; strong sales growth among both new and existing customers; recognition from Gartner as an APM Innovator; doubling of our headcount; and the release of seven major product enhancements, including the award-winning Application Inspection Triggers technology. With the two outstanding additions to our team, we're looking forward to another banner year at ExtraHop!

To learn more about ExtraHop's unique network-based approach to APM, sign up to watch our online application performance monitoring demo.