Stop Fighting With Your Management Tools 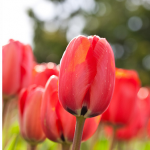 I was in Skagit Valley over the weekend, shooting some photos at the Tulip Festival. My photographic partner in crime works in IT, at a large software company in the Pacific Northwest. The topic turned to network management tools on the way back. And he started talking about how easy some of their management tools were to use. I got on my soap box and told him "most network engineers have no idea what ease of use really means because the bar has been set so low." The reality is, many of you are fighting with your management tools daily and just don't know it.

The discussion reminded me of another anecdote from Tom, our VP of sales. He was meeting with a prospect, and one of the network engineers in attendance said how they were able to track down some problem in 2 hours, using an existing tool, and that was pretty good. Tom couldn't believe his ears, "2 hours is good? What if you're able to track it down with ExtraHop in a few minutes?"

I've been in the systems management industry for longer than I care to mention, and honestly

I think as a whole we have failed on the ease of use front and led to extremely low expectations from our collective customer base. Most products I've seen are designed by rocket scientists, for rocket scientists. There is onerous configuration, extensive training, secret handshakes and sacrifice of chickens involved in order to use many of them properly.  Mean while, these poor customers have been suffering through much abuse, not knowing there is a better way. One of my favorite examples is the Packet Sniffer, it's still the go-to product for many network shops, yet sifting through packets is just about as easy as locating a single snowflake in an avalanche.

At ExtraHop, we believe in delivering true ease of use, an intuitive UI - much like Google Earth, and raising the bar for our entire category of products. Don't buy the hype? Cruise over to our demo to see what you think, or better, email Tom and he'll be happy to show you himself.