I come to work daily to defend my job 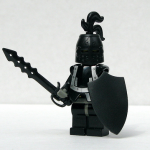 Had a really fun customer meeeting the other day, the participants were your typical IT geek/gurus, but with an extra dash of funny. The "blamestorm" part of our customer presentation really resonated with him, this is where we talk about when you have a problem with your application, most people go around the room and keep saying "nope, it's not me" and the network always gets blamed first. Our charming Mr. Network Guy said, "damn right, the only reason I come to work everyday is to defend my job it seems." It was very funny, but also sadly true. Somehow the network team definitely gets the short end of the stick.

application was exhibiting a general sluggishness. People started crying foul, "something's wrong with the network, everything's so slow". Right, the network huh? Which didn't really change from the previous day at all, what about that application which introduced a number of changes? With the ExtraHop system in place, luckily we were able to find some serious database errors to be the root cause, and got the poor network team off the hook.

Moral of the story is, it's not always the network. Today's applications are supported by a complex ecosystem of servers, network devices, databases, storage devices and the application code itself, any one of them can be the true culprit. The key is to have complete visibility across all these layers, so you can find the root cause and avoid these knee-jerk reactions. It's no longer us vs them, it's time for more collaborative troubleshooting.